Grits has been elected as a member of American Pointing Labrador Association’s Hall of Fame!

GMPR Grits of Black Forest SH, owned originally by Delery Guillory. Grits was the first yellow dog Black Forest came out with, a son of Thor, a famous pointing Lab from Minnesota. Grits pointed birds from the first bird encounter he ever had and every one after that, bird allowing. When the Thor line came through and Grits was the first to gain national attention, the standard for pointing took another major jump. Grits pointed more like the pointing breeds than conventional pointing Labs; he was the consummate hunter and staunch pointer without ever hearing the word whoa or any other control cue in the field. Grits himself produced dozens of GMPR’s, MH’s and qualified all-age field trial dogs. Having won countless upland competitions, Grits had probably the most significant effect on raising the standards for what could be expected out of Labs in the upland field, and to this day, in the pedigrees of the most remarkable pointing Labs, it is very common to find Grits lurking only a generation or two back. His contribution to pointing may never be fully recognized, but those studying bloodlines will find a strong correlation between pure and natural pointing and the presence of Grits in their dog’s heritage.

Grits is a well toned, good looking, 70 pound yellow male. He has incredible muscling throughout his body. He has a staunch, natural point to go along with his outstanding retrieving ability. Grits has numerous achievements, such as winning 3 APLA hunting trials. In 1996, he won the Colorado State Pheasant Championship Jr. Pointing division at just 12 months old, being the youngest dog entered. Grits was also chosen as the top Junior Pointing dog in the state. In 1997, he won both the Junior and Senior Valhalla Club Championship. In 1996 Grits won the One Box Quail Hunt and in 1997 he was runner up, and placed in 1998. At the Rocky Mountain Upland Championship in 1997, Grits placed 3rd against a strong field of dogs. Grits qualified for the 2000 Colorado State Pheasant Championship and the National Hunting Dog Association National Finals.

Grits has consistently performed in hunting competitions as well as being used as a guide dog for many upland and waterfowl hunting adventures. Grits’ offspring are taking up where he has left off, he has produced several Grand Master Pointing retrievers such as CP, MPR, GMPR Evening Star of Black Forest SH, CP, MPR, 4XGMPR Black Forest Bear Grits MH, CP, MPR, GMPR Hunter of Genesee JH, qualified all age.

Stud information and videos are available. 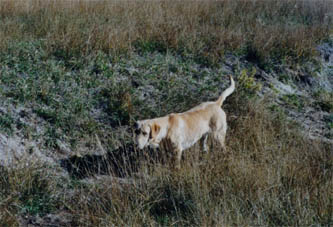