Sir Hershey has been elected as a member of American Pointing Labrador Association’s Hall of Fame!

GMPR Sir Hershey of Surrey, owned at one time by Delery Guillory who bought Hershey out of the northeast for a good chocolate hunting dog. When Delery went upland hunting, the big brown dog kept pointing the birds. Connections were made with a couple of other dog fellows in the county whose dogs also pointed and tests were run to showcase the versatile nature of these dogs. Along with a couple of other males, Hershey was awarded one of the first Grand Master Pointing Retriever titles ever given by the newly formed American Pointing Labrador Association. In those days the training wasn’t as evolved as it is now but Hershey reliably pointed birds, ran marks and blinds and was one of the dogs to set the original standards for pointing Labs. Hershey also sired a number of Grand Masters and countless hunting dogs of all colors, most of whom were reliable and hardy pointing retrievers. Because of his gentle nature, good looks and extreme ability in the hunting arena, Hershey probably had some of the greatest influence in the early days making people believe in the pointing Lab, not only as a superb hunter, competitor but also as a great companion and family dog as well. Most chocolate dogs pointing today can look back a few generations and find Hershey in their pedigree. The gentle eyes, reliable retrieve and efficient hunt and point are three of the key signs of his presence in today’s dogs.

Sir Hershey of Surrey recently passed away. Hershey was a great hunter and companion who will never be forgotten. He had a desire for hunting that will be hard to replace. He sired numerous proven prodigies that will continue to bring many of us unforgettable hunts. We will miss Hershey’s constant need for attention and love.

Hershey was the 1988, 1989, 1991, and 1995 Colorado Open State Pheasant Champion, and in 1995, the true pointing division. Hershey had 21 different hunting trial victories and was featured in five major newspapers, 4 hunting/outdoor magazines and was on ESPN in October 1991.

Hershey sired more certified pointers than any other dog in the country, including Grand Master Pointing Retriever Cajun of Black Forest. Hershey was a masculine 80 pound chocolate male. His heart and desire made him one of the best all around Grand Master Pointing Retrievers in the nation. With four state titles, three pointing titles, over 21 trial wins, national press, and the tremendous success of his progeny, Hershey was one of the best stud dogs in the nation.

Current up to his death 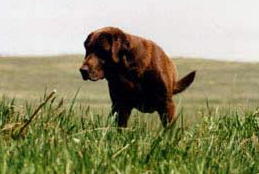